The BioMatch method of matching golf clubs specifies the optimum mass of each club.  One important factor in determining the optimum mass is the moment of inertia around the center of the grip.  BioMatch makes a model of your body swinging your clubs.  BioMatch thereby determines the optimum weight of each club so that your upper body, hands, and clubhead are synchronized.  The optimum weight of each club is achieved by inserting the appropriate size of weight into the grip end of each club.  Once that is done you can apply the same swing to all your clubs.  As you now only have one swing to ingrain in your mind, your game will improve effortlessly as accuracy and distance improve.

The USGA and the R&A just issued an Area of Interest Notice proposing that the Driver length shall be limited to 46" plus 1/2" allowance for grip.  This is in an attempt to avoid further increases in driving distance.  Tall people with short arms will need a special permit to play longer clubs.  Personally, I think this will complicate the rules further.  If it is not broken, why fix it?

Here is the letter from the USGA. 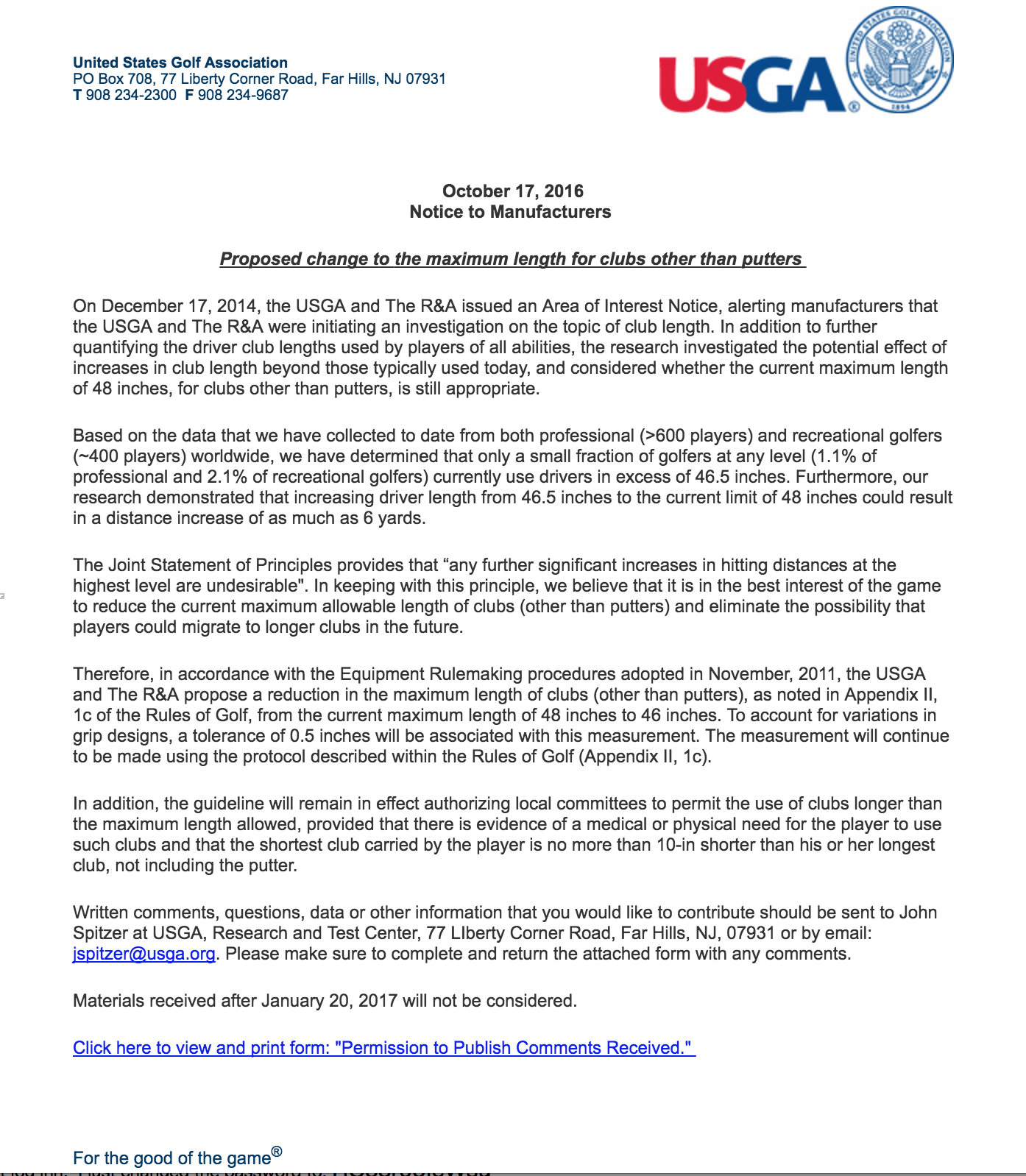 In his latest book, Best of Tampa Bay, Sven Boermeester devotes a full page to Rational Golf LLC as an example of the many start-ups in the Tampa area.  The founder of Rational Golf, Gisle Solhaug, invented the BioMatch method of matching golf clubs.  The article explains how this patented invention is set to make the game of golf easier to play for all.  Check out the article, and a great book, right here. 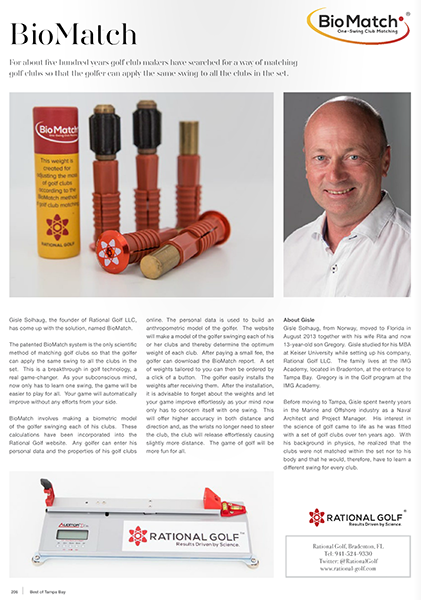 Unfortunately only his irons are matched. The rest of his clubs can easily be matched by the BioMatch method so that he can use the same swing for all his clubs, without altering the length of the clubs or the weight of the club heads.  The optimum weight of each club is obtained by inserting the appropriate size of weight into the grip end of the club. 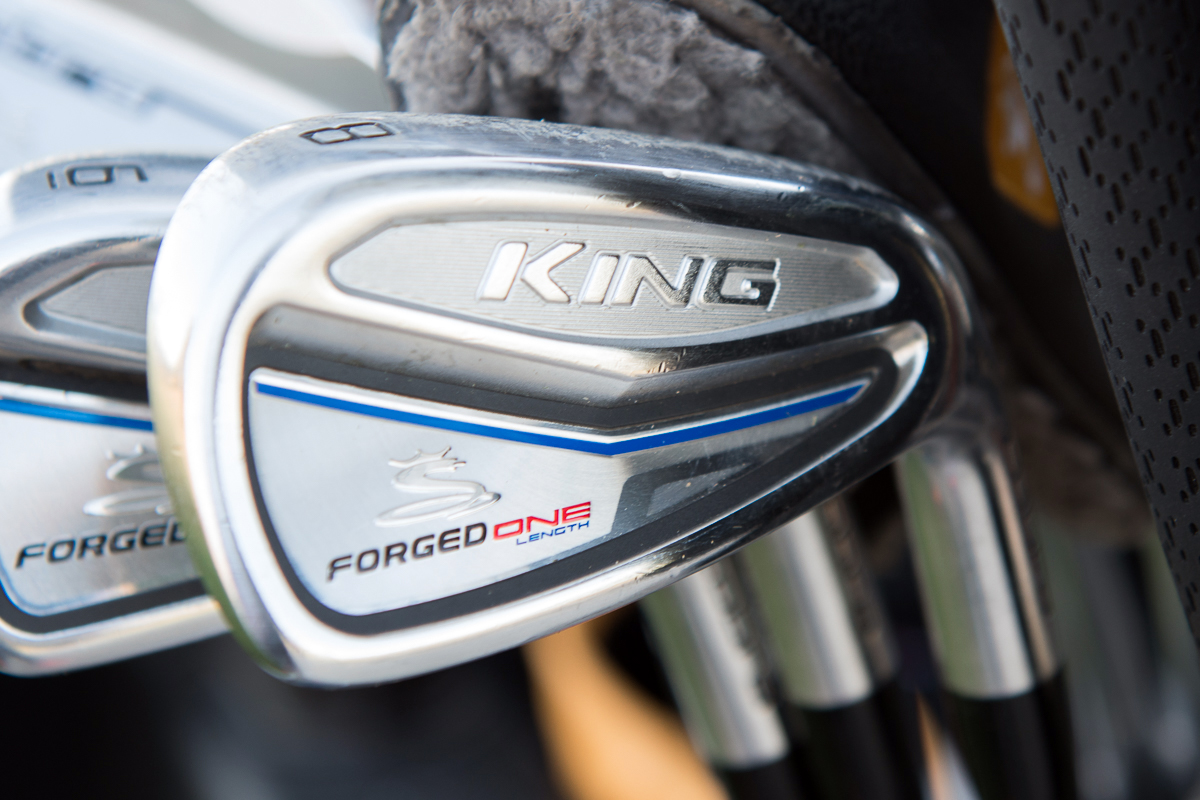 On Friday, I posted an article to my blog in excitement of the return of Tiger Woods to golf. Unfortunately, Tiger has withdrawn from the Safeway Open. On Monday, Woods stated that “his game was vulnerable”. “After a lot of soul searching and honest reflection, I know that I am not yet ready to play on the PGA Tour or compete in Turkey,” Woods said in a statement. “My health is good, and I feel strong, but my game is vulnerable and not where it needs to be. It’s not up to my standards, and I don’t think it would be up to yours.”

This saddening news for many came just three days after he committed to playing in the Safeway Open and three days before the open is setting to take place. Speaking earlier Monday on Golf Channel, Notah Begay III said that Woods had "some concerns about the sharpness of his game" after sitting out the past 14 months. “He just didn’t feel like his game is where he wanted it to be to be competitive," Begay said.

“This isn’t what I wanted to happen,” he said, “but I will continue to strive to be able to play tournament golf. I’m close, and I won’t stop until I get there.”

It looks like the wait for Tiger to return to golf will continue to be highly anticipated.

Tiger Woods announced on Friday, October 7, 2016 that he will be returning to the PGA Tour. Woods will participate in the Safeway Open, which begins October 13th. In a website update, he states that he hopes to play in the European Tour’s Turkish Airlines Open, held November 3-6. As well as the Hero World Challenge held December 1-4. This is all dependent on his physical recovery.

After his las competitive play at the Wyndham Championship, in 2015, Woods underwent two back surgeries. At his appearance at the Ryder Cup last week, Woods gave no indication of his intentions to play, nor the condition of his health. However, his play of the course showed him to be ready for a return. Before teeing up at the Safeway Open, Woods will participate in the Tiger Woods Invitational, held October 10-11 on the Monterey Peninsula. From there he will kick-start a return to golf that everyone has anxiously been waiting for since over a year ago!

The 41st Ryder Cup more than lived up to expectations as the United States on Sunday clinched its first crown since 2008, winning Sunday singles 7.5-4.5 to capture the cup by a 17-11 margin. The United States is now home to the Ryder Cup for the first time since 2008, and Davis Love III improves to 1-1 as the American captain, getting revenge for the 2012 collapse at Medinah.

Reed wins 1 Up vs. McIlroy

Fowler wins 1 Up vs. Rose

Moore wins 1 Up vs. Westwood

DJohnsons wins 1 Up vs. Wood

Here are the individual records for each player on both teams.

After a dominant performance in morning session foursomes in which the United States swept Europe 4-0, the Americans saw their lead cut to 5-3 following a tremendous showing from the Europeans in the afternoon four-ball matches.

To be successful in a game as difficult as golf, you need to practice. Very few people can head out for a round and post a good score without working on their game beforehand. Practicing at a driving range is a perfect way to get better, but there are some things to remember. You need to follow the rules and be courteous of the facility and others joining you on the range.

Some driving ranges require that you hit from a mat, while others allow you to hit off the grass. It is very important to follow the rules. Stay within the boundaries. Hit each ball close to where you hit the last one to minimize damage.

Be aware of your surroundings. Stay far away from others to minimize the risk of hitting anyone. Before you swing, look around to make sure that nobody is behind you or walking by. Never walk out on the range to retrieve balls.

Remember that you are sharing the range with others. Keep the noise level down and remember to keep your cell phone set to vibrate. Avoid sudden movements around a player who is about to swing.

Care for the Greens

Most driving range facilities also offer putting greens and short-game areas for people wanting to work on chipping and putting. Treat these areas as you would a green on the golf course. Do not chip on to the greens from the driving range.

By keeping these tips in mind regarding etiquette at the driving range, you will ensure that you and all other golfers will have a pleasant experience.

Ryder Cup (Named after the English businessman Samuel Ryder who donated the trophy.)

The Ryder Cup has become one of the world’s greatest sporting events. It’s Team USA vs. Team Europe, as 24 of the world’s best golfers play for pride, patriotism, and the most coveted cup in golf. The competition is every two years with the venue alternating between courses in the US and Europe. A three-day competition that includes head to head match play, the team that gets to 14 out of 28 available points will take home the Ryder Cup. Don’t miss a moment, September 30 to October 2, only on Golf Channel and NBC, as Team USA fights to reclaim the cup at home. Golf Channel will be there from the beginning, live from Hazeltine National Golf Club, in Chaska, Minnesota.

Schedule (All times Eastern and airing on Golf Channel and NBC)